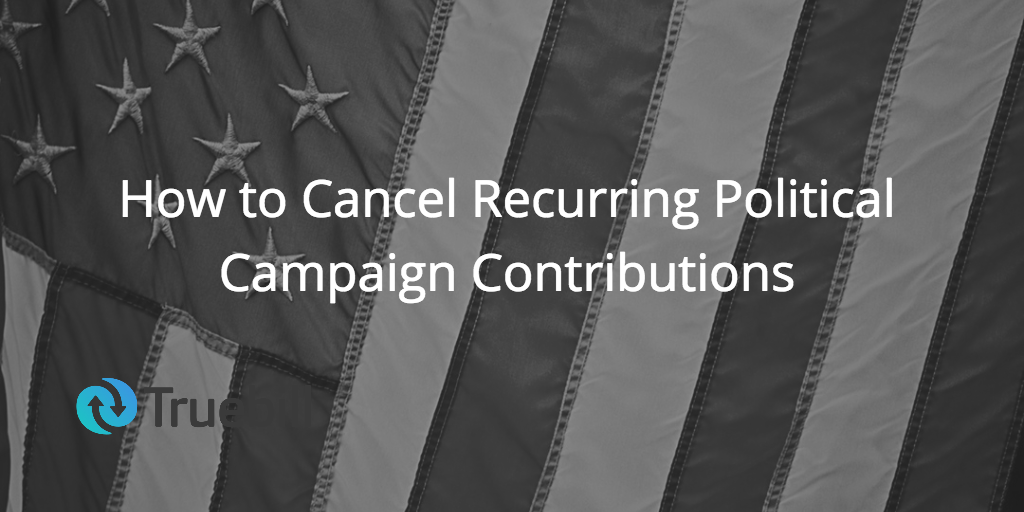 How to Cancel Recurring Campaign Contributions

We spend a lot of time on this blog looking at the hidden, recurring, often small enough to be missed, charges that come out of our accounts each month. With election season just ending, many of our readers are wondering how to shut off recurring campaign contributions. Some of them are still wondering after looking up how to do it.

How Do Recurring Campaign Contributions Work?

Like any other not-for-profit enterprise, political campaigns work with money from donors. Donations from large corporate interests and the mega-wealthy have gotten a lot of press, but many of those donations come from middle-class and working-class families. Since those families rarely have the money to write a single, large check, they opt for subscription plans where the campaign draws a set amount monthly.

In some cases, the payment goes through a specific website. The most famous example of this from the recent election cycle was the huge outpouring of small donations online for Bernie Sander’s campaign, but most local, state and national candidates have this option. In other cases, websites like RaiseTheMoney.com handle the fundraising for the candidates (with a model very similar to that of crowdfunding sites such as Kickstarter and GoFundMe). In both cases, the end result is the same: money is taken out of a donor’s bank account each month and deposited into the campaign funding accounts of the candidate, organization or cause accepting the donation.

So, What’s the Problem with Recurring Campaign Contributions?

It turns out hard-to-cancel subscription models aren’t limited to diapers and fitness apps. Whether donors chose to end their support mid-election, or now that the cycle has ended, many have reported having trouble with cancelling some recurring donations. Money.com’s mic investigated specific reports from Trump donors and found his site to be the worst offender in this election.

Their investigation began when Jeremy Diamond of CNN tweeted a message to the Trump campaign asking how to cancel his recurring payment. Diamond reported, along with complaints from thousands of others, that the website had no clear or easy way to do so.

Further, calls to the campaign’s financial office or donor service personnel found nobody who knew how, either. When Diamond did finally find out how to make it happen, the process involved a highly complex reregistration, navigated through a nest of screens he described as “labyrinthine.” Mic tested the story with a $1/month donation, and had the same difficulties figuring out how to cancel.

RaiseTheMoney had a similarly frustrating cancellation process. Although you can start recurring monthly payments through the service, they will not process cancellations. To do that, a donor must contact the campaign directly, reach somebody with the access and authority to impact financial transactions, and get that person to cancel the donation.

By contrast, both Hillary Clinton and (earlier) Bernie Sanders had clear processes for ending payments. For example, Clinton’s donation page has a “Remove Card” option in the accounts settings. One click, and done.

How Do They Get Away With That?

As it turns out, there’s nothing illegal about it. The Federal Election Commission is the only body responsible for any aspect of campaign financing. Their mandate is to be watchful for the big picture of campaign finance — whether any donors are wielding undue influence, or any donations are actually illegal. They protect the system from donors and have no requirement to protect donors from politicians.

The election cycle is over with, but that doesn’t mean your campaign donations are. Individual candidates and campaigns will vary on their policy now that the polls have closed, but many have to start saving up for the next election season. RaiseTheMoney won’t automatically cancel the payments. Neither will the Trump campaign. Clinton’s office has not yet reported whether they will stop the payments or put the funds toward another Clinton initiative. If you want out, here’s what you do for each of these three most common funding choices this November.

Do you have a good, bad or indifferent experience with campaign donation websites or service? Tell us about it in the comments below and join the conversation.