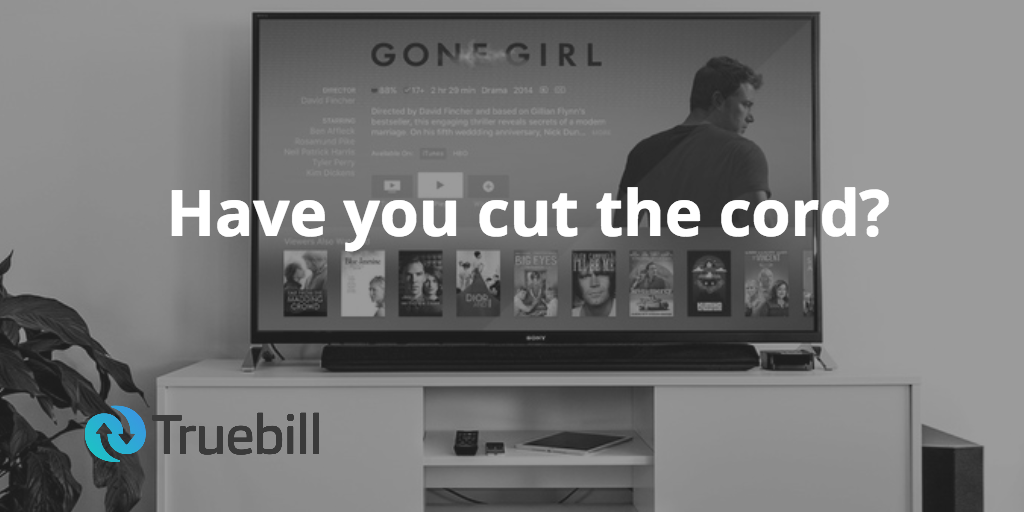 One of the biggest trends in entertainment and media during the past few years is the rise of “cord cutting” – canceling the cable bill. More people are cutting the cord to their cable bills and switching exclusively to streaming content; instead of watching cable TV, they’re opting for Netflix, Amazon Prime, Sling TV and other online content streaming apps.

Cutting your cable bill is a good way to reduce your monthly expenses, and many people find that they don’t miss cable, as long as they can still watch their favorite shows, movies and sports broadcasts online.

But some people are discovering that it can be harder than they expected to cut the cord. According to statistics cited by the Minneapolis Star-Tribune, cable companies are only losing approximately 1 percent of their customers per year to Internet streaming services. Many people would like to save money on their cable bill, but they end up staying connected to the cable cord out of a sense of convenience, or by being talked into staying signed on for a lower monthly subscription price.

We talked with a few experts about the latest overall trends in consumer behavior around cord cutting, why cord cutting is happening, what are the benefits of online streaming vs. cable, and what are the factors that keep people from cutting the cord and moving away from cable, even if they want to.

But as Furqan Tafseer, Digital marketing Strategist at PureVPN, says, not everyone is a technically savvy early adopter. “I personally am a cord cutter, and being in this industry, I have come across many cord cutters and streamers and bloggers who write about it,” Furqan said. “However, convenience plays a huge role in making people stick with their cable TV. If you check some basic information about cord-cutting and imagine how a 40-50 years old non-techie person will handle it, then you will realize the fact that for many people, cord cutting sounds like too much of a hassle. Lots of people who are non-techies are going to stay with their good old familiar cable TV, even if they could save a few bucks each month. So often when people decide not to cut the cord, it is mainly because of convenience and ditching their cable surely does sound too difficult to many.”

Canceling the Cable Bill is the Path of Most Resistance

Another factor that keeps people from cutting the cord is a sense of inertia. Cable TV subscriptions take some effort to cancel; especially if your cable bill is set up for automatic payments from your bank account each month, it’s often easier for people to just keep letting the cable service continue.

Furqan Tafseer said that lots of people tend to want to continue with their cable TV service, even if they are also using online streaming services, just because it’s the path of least resistance. “Definitely there is a sense of inertia. If anyone can afford cable TV with one or two streaming services it is extremely hard for them to ditch the cable and set up antennas or streaming services to enjoy the shows and programs of their choice,” Furqan said. “Saving a few bucks isn’t a huge motivation for these people, because most of us don’t like something which seems full of hassle if it isn’t necessary.”

One of the biggest limitations on the growth of online streaming services has been the belief among consumers that it’s too hard to get live sports. For example, services like Netflix and Amazon Prime do not offer live sporting events, so many sports fans have decided to keep their cable subscriptions just so they can watch sports, even if they like to watch their favorite shows and movies on Netflix or other services. However, a number of apps and online services, such as Sling TV, NBC Sports Online and FoxSportsGo, are starting to offer online streaming of live sports broadcasts.

The trend of ditching cable is still going up, at a low pace, but it definitely is going to accelerate and take over.

Other consumers decide not to cut the cord because they are already comfortable with the way that their cable TV works and they don’t want to have to figure out how to deal with the complexities of online streaming and new ways of watching TV. After all, if you want to use Netflix or Amazon Prime on your TV, you need to use additional devices like Roku or Apple TV or Google Chromecast; this can be too complicated for many people.

Karen Hoxmeier is the Founder of MyBargainBuddy.com, a website that helps consumers get the most for their money. She said that some consumers, even in her own family, are reluctant to cut the cord because it’s what they know how to use. “My aunt doesn’t cut her cable because she is reluctant to ‘learn’ a new way of watching TV. She has an Apple TV that has been used twice and those two times were when we were trying to show her how to use it. Sometimes people just get comfortable with what they are familiar with and don’t want to take on change, even if it will save them money.”

Another factor that keeps people from cutting the cord is the aggressive sales tactics of cable companies; these companies know that people are tempted to cut the cord, so they redouble their efforts to keep subscribers with special discounts, bundles of services, and other offers.

“Of course cable companies don’t want people to cancel, so they lock their customers into contracts, offer them discounts to bundle services like internet and cable, and throw out teaser rates when someone threatens to cancel,” Karen Hoxmeier said. “Sales tactics like that make it much harder for people like my aunt to adopt new technology.”

The rise of online streaming services has on the whole been a good thing for consumers – it’s giving people more options for how to watch their favorite shows and movies. However, if you want to save money on your cable bill, don’t be afraid to cut the cord. It’s getting easier than ever to use online streaming services to see everything that you used to see on cable, and more. Or if you want to keep your cable subscription, don’t be afraid to ask your cable provider for a retention discount – sometimes consumers can save money just by calling and saying that they want to quit; your cable company might be willing to give you a good deal in order to keep you as a customer.